[FOOTBALL] Chelsea star, Callum Hudson-Odoi arrested over row with a model he invited to his home 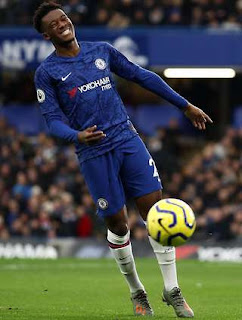 England and Chelsea star player, Callum Hudson-Odoi was arrested on Sunday morning following a late-night tryst with a model who met online and invited her to his penthouse.

The 19-year-old Chelsea winger was reportedly taken into custody and a woman, who had paid a visit to his flat earlier on Saturday evening, was taken to hospital by ambulance.

A Metropolitan Police spokesman confirmed that an arrest had been made at Hudson-Odoi’s west London apartment after they were called shortly before 4am.

“Police and London Ambulance Service were called at 03:53hrs on Sunday 17 May to a report of an unwell woman,” the Met said.

The Sun report that Hudson-Odoi met the woman online and invited her to his home, sending a vehicle to pick her. Neighbours of the 19-year-old told the publication that his ‘acquaintance was very glamorous’ before the property was ‘crawling with police’.

The neighbours also claimed that police had returned to the building later on Sunday afternoon to complete investigations into the matter.

It’s unclear whether Hudson-Odoi was arrested for breaching lockdown rules or for an alleged clash with the woman who police say was unwell.