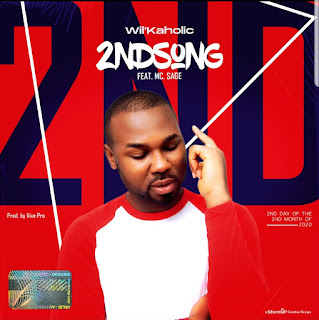 WilKaholic has today released his debut track, “2nd Song” which is one of the lead singles from his hugely anticipated debut album coming out later in 2020.The release of “2nd Song” is rides on the back of WilKaholic’s previous musical activities over the years which include finishing Star Quest 2008 as first runner-up with Da Heritage Band and other informal musical activities.Rhythmic and refreshing, ‘2nd Song’ is a track drawn from the perspective of a man trying despirately to express his innermost feelings to the girl of his dreams. Written by WilKaholic (Rap potion written by MC Sage) and produced by Vive Pro, ‘2nd Song’ would be released along with a lyric video produced by Salmon Seal – for Same OG creatives.Singer, songwriter, instrumentalist and producer, WilKaholic is a maverick in the music world.  By softly plucking the strings on his guitar accompanied by his soothing vocals, WilKaholic expresses his deepest feelings and tries to provide relief to a troubled world through his sound. He then creates diversity with his blend of different genres of music to satisfy almost every musical craving. One fan said “WilKaholic is a musical delight with so much to offer”.Derived from various experiences both by himself and close associates, WilKaholic provides a breath of fresh air by combining passion and dexterity. “I wish to send a positive message to everyone who would be listening to my songs and always give my listeners something to take away”, WilKaholic stated in one of his interviews.Now ready to be regarded as part of the league of Naija greats, WilKaholic’s positive energy remain a constant drive. This 2020, watch out for WilKaholic