« [FOOTBALL] Chelsea star, Callum Hudson-Odoi arrested over row with a model he invited to his home | [GIST] ‘A Lot Of Online Glory’ – Yemi Alade Prays For More Wins (Photo) » 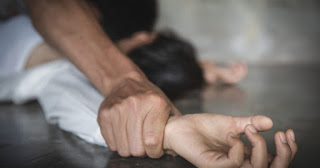 The police in Lagos have arrested a 50-year-old man Tyndale Ede for alleged defilement of his 19-year-old daughter since she was 11 YEARS OLD.
Eden was arrested on May 9 following a complaint by his wife (names withheld) at Ikotun Police Division.
It was alleged that the suspect’s incestuous behaviour was discovered by the woman at their Kajola Street, Ikotun residence after she noticed their daughter was being disrespectful towards her father.
She was said to have probed the teenager to know what was wrong and she opened up to her mum that Ede has been raping her since she was 11years.

The victim was said to have told her mum he often threatened violence on her each time she resisted him, adding that he warned to deal with her if she ever told anyone about it.
According to police spokesman Bala Elkana, Ede was charged to court on May 11 after thorough investigation and was remanded in Police Custody.
He said:
“The suspect was arrested by detectives from the Family Support Unit (FSU). He confessed to the commission of the crime. After a thorough investigation into the case, the suspect was on May 11, charged to Chief Magistrate Court ll Ogba on five counts of incest, rape, sexual harassment, defilement and sexual assault. He is remanded in police custody while the case is adjourned till June 15 for hearing,” Elkana said.

« [FOOTBALL] Chelsea star, Callum Hudson-Odoi arrested over row with a model he invited to his home | [GIST] ‘A Lot Of Online Glory’ – Yemi Alade Prays For More Wins (Photo) »